In Mortal Engines, we are thrust into a universe where the planet is considered uninhabitable, and cities (or, most human dwellings actually) have been placed onto tracks or legs and made to survive by moving and ingesting one another. Residents, buildings, and all. The world itself was cast into a semi-technological darkness by the Sixty Minute War, reducing society back into a Victorian-like Era. Tom Natsworthy, one of our unlucky main characters, is the resident of the Traction City of London. A member of the Guild of Historians, Tom is in the middle of going about his duties when his life is suddenly thrust into chaos. Literally. He’s pushed off the city shortly after witnessing an attempted murder, and so begins his journey with the beautifully flawed Hester Shaw. The two struggle to return to London, each for their own reason, and in their journey grow to depend on — and even trust– one another. All the while trying to kill one madman, and stop another from destroying the world as they know it.

Like the title suggests, the entire story is pure layered movement. In the world of Municipal Darwinism, the stronger cities eat the weak. But the weak can also grow strong. London wants nothing more than to consume more cities and become the strongest around, but its own greed cripples it in the end.

The characters, like their dwellings, never stop. Their backstories, actions and thoughts all fit together to create one massive engine, one epic story. Something I particularly enjoyed was how Reeve gave us the perspective of multiple characters. We follow along with them, fall in love with them, and even feel the pain of their losses. I’ve always enjoyed multiple POV novels because of this. The more perspectives, the fuller the story. (Granted, too many perspectives might make a story too much to follow. But that’s not the case here.)

Being more of a Fantasy and Adventure kind of gal, I like the fact that even though Hester and Tom are forced onto one another by circumstance, their relationship, friendship, and eventual something-more developed organically and in the background of everything else. Hester, herself, is not only emotionally scarred by the events that led her to London, but is also physically scarred. She isn’t your typical beautiful heroine, and spends most of the novel hiding her face due to the scar left there by a one of the main villains. Like Tom, we are at first shocked by her face, set in a permanent scowl, but quickly forget about it in the face of (no pun intended) her determination, bravery, and even occasional gentleness. She is a force all her own, and one of the main reason Tom grows into the hero that he becomes (whether he likes it or not).

I will say that I find it a little shocking that the book (the series as a whole) is marketed to young teens, specifically ages 12-17, mainly because there is a lot of bloodshed, and even a few graphic deaths. For example, someone gets stabbed through the neck. Others get burned alive. Not the usual kind of imagery one would expect to find in a book for a twelve-year-old. Fifteen and up, sure, no big deal, but I worry that some of the darker scenes in the book might be too strong for younger kids.

That said, the darker parts are also my favorite. There are several scenes that are wonderfully creepy or eerily beautiful. For example:

“Shrike moves through the suburb’s streets with his head swinging slowly from side to side. Bodies drift in the flooded rooms like cold tea bags left too long in the pot. Small fish dart in and out of a pirate’s mouth. A girl’s hair coils on the current” (Reeve 163).

Or, “A halo of St. Elmo’s fire flares around [her] face and her hair sparks and cracks as he strokes it. He gently moves a stray strand that has blown into her mouth, and holds her close, and waits — and the storm-light breaks over them and they are a knot of fire, a rush of blazing gas, and gone: the shadows of their bones scattering into the brilliant sky” (293).

Try deleting that from your memory.

In all, Mortal Engines is a wonderful romp through a post-apocalyptic world filled with cities on the verge of dying, and characters brimming with life. They are flawed, but they are all beautiful in their own right. They live, they struggle, they die, and they live on.

*Photo taken while reading by candlelight. Not because I was feeling extra old-fashioned, but because a storm took the power out. 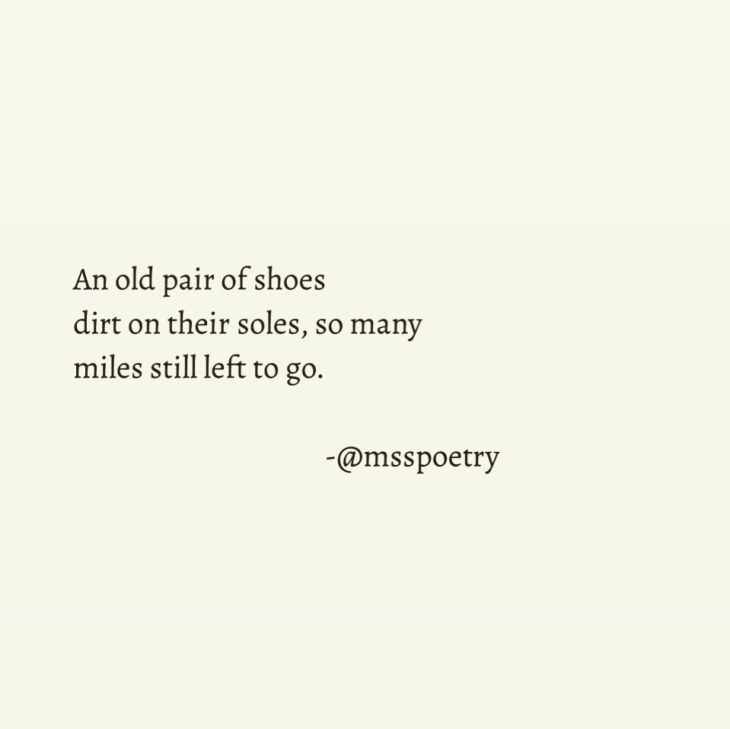 Just a quick Haiku for your day.

These last few months have been a whirlwind of emotions, events, choices, and everything else in between. But, to get through I’ve not only been reading more books and binging on Netflix shows (Sense8, just love), but I’ve also picked up poetry again. Writing about my experiences has helped me in so many ways.

How do you cope with hard days?

I apologize in advance for my absence, and am not ready to say that it is over. This last month has been quite stressful, and so I will be taking some more time to organize things and deal with a few unexpected problems. (Like a car accident, though not my fault. The culprit ran, bugger.)

I hope you are all well, and wish you a wonderful Easter and a wonderful beginning to April and Spring!

Now that Vero’s been canned, I’ve finally decided to give Twitter a try. It only took me a few years to give in, but as of last night, my Twitter account (@woodsandroads) does exist. On it, expect to find random musings, photos of my journals and day-to-day life, book recommendations (or aversion warnings), music recommendations, and what else have you.

And, if you’re on Twitter too, let me know!

Happy Sunday all! If you read yesterday’s post, then you know I have been an avid snailmailer for several years now. Since college, I’ve enjoyed setting aside some time to write back to penfriends in the US and other parts of the globe. It’s both physically and emotionally therapeutic. However, for those of you looking to get into snailmailing, I do have a few warnings for you, and would also like to share a few things I learned along the way.

Let me first begins with the Cons of Snailmailing:

Now, the Pros of Snailmailing:

One thing that is neither a Pro or a Con is that snailmailing does take time. It takes time to write a letter, mail a letter, and receive a response. So, if you decide to give this a try, don’t expect instant responses. Be patient. Also, sometimes, you will run across people who want to swap more, or write more. It all depends on what kind of correspondence you are looking for, but just be sure to establish the relationship at the beginning. (By swap, I mean people who like to trade stationery goodies. Which is another form of snailmailing.)

I found most of my penpals on Tumblr or Instagram (though one I met on WordPress). More recently (as in the last year), I’ve been on Instagram because, let’s face it, you can tell if someone’s Instagram feed is fake over a Tumblr one. (Or, at least, it’s easier to tell for the most part.) Refer to Con #5. There are shady people out there online, and you do need to be careful with who you interact with. Listen to your gut, and if something seems off about a person, abort. Abort mission asap!

Also, if you’re living with others, family or friends, be sure to ask their permission before disclosing your home address. (Or, you can get a PO Box.)

Well, I hope this proves useful to some of you. If you have any questions though, or would like to share your own experiences, please comment or reach out via email.

And with that, have a great Sunday!

Growing up, my world was very small. Socially and physically. I wasn’t allowed outside without supervision, and couldn’t sleep over at any friends‘ house. (In fact, my first sleepover wasn’t until college!) It was only school, whatever after school program was offered, the library (on weekends), and home. Suffice to say, I was pretty sheltered and only knew people around my hometown.

I never thought I would know people from other parts of the world.

During my second year of college, around 2011, I stumbled across (ok scrolled across) a post on Tumblr that jumped out at me. It was a penpal ad from a Tumblr user. Who it was I cannot recall anymore, but the very fact that there was someone else out in the world who wanted to write to someone, via pen and paper, was intriguing. I wondered if there were others, and sure enough, after clicking on a few tags, I found a good amount of ads.

So I responded to a few, received responses (only to a few of my own), and little did I know, fell into a new hobby called snailmailing. Now, in 2018, I correspond with people in the states, and all over the world. I honestly never imagined this would be possible, and it is.

My world has grown since I was a child, and by writing to people I’ve met online, it’s only grown more. Not only this, it served as a great therapy for when I was sad, depressed, or sick. It helped knowing that there were people I could write to, even though I was alone during my day-to-day life.

Being able to confide in someone, and receive an outsider’s opinion, helped tremendously. As someone who does have a spark of social anxiety, writing to another person is much more easy and liberating than speaking to someone face to face. There are fewer walls, and fewer fears of rejection. (Of course, not hearing back from someone does hurt, but not as much as it does when someone rolls their eyes and walks away right in front of me. Gladly, that rarely, if ever, happens. But the fear remains.)

So, if you ever feel lonely, want someone to talk to, want to learn about another part of the world, or if you simply want to learn and practice a new language, I encourage you to reach out and try getting a penpal for yourself.

But that said, there are some good sides and bad sides to penpaling. I will address these in tomorrow’s post, so stay tuned.

For now, enjoy the rest of Saturday!

WOODS & ROADS
Create a free website or blog at WordPress.com.